February 26-27, 2000 – Ronny mentioned he had just read an article saying that Anna Kournikova and Venus Williams were not going to play the IGA Oklahoma tournament and had pulled out…and that Monica had taken a wildcard into the tournament. Maybe we could still get tickets! We couldn’t take the chance of waiting to see if she made it to the final or not and then find out the tickets were sold out, so we took a gamble and ordered tickets for the semifinal match. At that point, we were just hoping that she would make it to the semifinals. Because if she didn’t, we would miss out on getting to see her.

Well Monica did it of course. After only losing 6 games in 2 matches after recieving a Bye in the 1st round, she easily made it to the semifinals to face Amanda Coetzer. We drove to Oklahoma City and found a place to stay, and then went out to get something to eat and to find the place where the tournament was to be held. We had just left the restaurant when Ronny said he just saw Amanda Coetzer drive by in a BMW!

The next day we arrived at the event early and were extremely excited! This was our first time to attend a pro tennis match, not to mention Monica was supposed to be here. When we finally got through the line and found our way in the auditorium…..there was Monica out on the court practicing! We just froze and watched as she hit some last balls and then she and her practice partner left together. We found our seat, got our camera ready and got ourselves situated. There were tons of people walking everywhere around the court, on the court, coming in to sit. We saw the guy Monica was hitting with come out and walk around. He then went up to the top of the arena to a special section above everyone else, where about 20 other were also sitting. After the tournament officials made tons of announcements and everyone was in, they announced Amanda Coetzer then Monica. We went nuts yelling and cheering for her (as I said, we were very excited)!

Monica won easily 6-1, 6-2. It was amazing how hard she really does hit, the ball was just flying off her raquet. Amanda was on the defense the whole 40 minutes it seemed (can’t remember exact match length, but it was quick)! We ran down after the match to try to meet Monica and waited with a whole bunch of other people. We were thinking no way, by the time she gets this far down the line of people crowding the court, she will move to the other side. We were so nervous that we were gonna miss out just barely – and then here she came, then closer, then there she was!

Ronny gave her a print out of the front page look of our site (what it looked like back then), and said “Monica this is a print out of our website we dedicated to you, we want you to have it” – And all I could muster up was, “Mmm..mm..mmooonnn..ica, can you please sign this for me?” I’m a dork! Ha-ha. She said “thank you” when Ronny gave it to her and signed her autographs for us on our ticket stubs (that’s all we could think of because we hadn’t brought any pictures), and then she walked to the other side and she did the same for all the fans over there. She actually stayed for a long time and signed for everybody. Then she was gone.

We immediately went to the ticket booth and bought two more tickets for tomorrow’s final. Still buzzing with excitement, we went to our car only to discover that we had a flat tire! Thankfully, we had a spare! We then went back to the hotel and freaked out some more, and talked all night about our experience and wondered what video coverage we may have captured with our camcorder.

We got there early again and got the same seats as yesterday’s match because it was first come first serve! If you ever watch this match look behind the car that was on display next to the court. If you see two guys all the way to the end, one wearing a blue shirt and one wearing a black shirt, that’s us!

Monica played fantastic tennis again and won the first set easily 6-1. Nathalie Dechy made a comeback in the second set and we cheered Monica on like crazy! Monica came roaring back to win it 7-6 (7-3 in tiebreak)! The final score was 6-1, 7-6! Monica just won her 45th title and we were there to see it live!

Everyone rushed down again as did we, and we got her autograph again! During the trophy ceremony, Monica mentioned that she loved it here and thanked the sponsors and everyone involved with the tournament, as well as the BMW rental to ride around town (so that was Amanda that Ronny saw)! She also said that she would be back and hopes to bring her mom with her next year. She also said she was off after this to catch a plane to Arizona, to play the State Farm Classic.

We stayed the whole time watching and absorbing the moment until she walked off court and was gone. This was the most awesome, fantastic, exciting thing we had ever done. We are still glowing, thinking about it.

Unfortunately we missed out on seeing her the next year in Oklahoma, and she won it again! We were very upset that we missed it; but it made us even more determined to see her again. 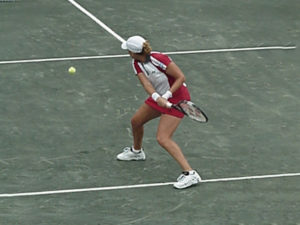 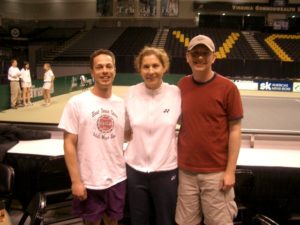 March 21-22, 2004 – “Raise A Racquet” Silent Auction & Exhibition – After Ronny and I missed our second flight from Atlanta, 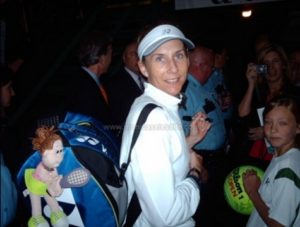 April 5, 2007 – With all the rain this past week in Texas we were lucky that it wasn’t raining, and it